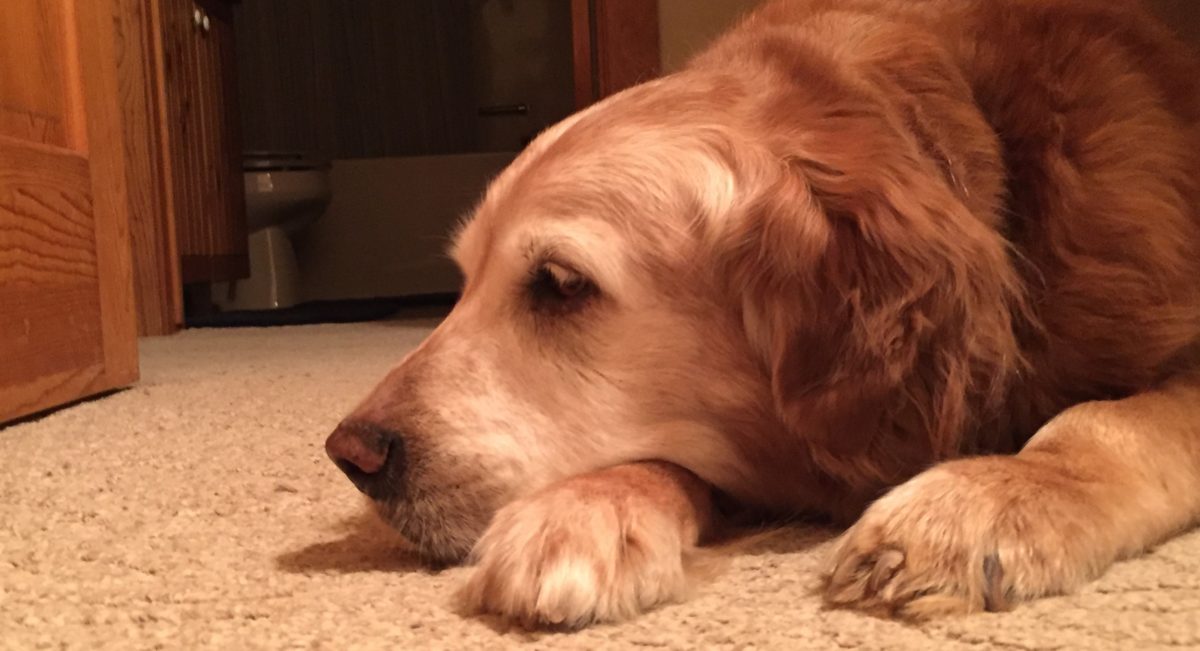 I was reminded recently of our dog, Doc, who passed in March of 2016.

Doc was a red Golden Retriever we adopted from the local Humane Society three days after Christmas in 2005.  Our veterinarian determined his age at 4-5 years old.  Doc had been turned in as a stray.  He was friendly and calm, typical of the breed and his age – and he met our 16-year-old Golden female, Cody, with no issues between them.  His callused elbows suggested days spent in a concrete-floored kennel.  Over the first few days, Doc exhibited some food and water aggression issues, and when scolded, he cringed on the floor, the loose skin of his head furrowed, and eyes squeezed tight, as if waiting for a beating.

Kind treatment and plentiful food and water taught Doc that he could trust, and he overcame the need to fight for his sustenance.  We spent time with him and loved him into our family.  He became the most devoted dog that ever came into my life. He taught me many lessons about how to be a better person.

One morning in 2012, more than six years after his adoption, and about a year after I surrendered my life to Christ Jesus, I watched Doc as he lay on a well-worn spot in the carpeted hallway between the kitchen and bedrooms.  He chose to be either at my feet, or at the edge of the hallway where he could watch my movements throughout the house.  His eyes or ears picked up my every move, and his body was always ready to rise and follow me.  I smiled in gratitude for my dog and his humble example; and I prayed that I would choose to be as attentive, faithful and devoted to the Lord as Doc was to me.

Reading Luke 22 recently reminded me of Doc and his lesson of simple devotion.  In Luke 22:24, the disciples argued about which of them was greatest.

I remembered my Doc ever lying nearby, and I had a deeper revelation about how God himself is both master and servant to us.  It humbled me anew that our Lord and Savior came to serve us.  And it saddened me that I so often treat my God like I treated my beloved dog.  I loved my dog, and I cared for him and set aside time for him each day to walk him and spend time with him.  But so often I went about most of my days just knowing he was there and not really paying much attention to him.  I wondered how often I do that with God?  He is the Almighty, yet He will stand by, watching me and just waiting for me to turn to Him so He can engage with me.  I asked myself what has become a regular question since putting my faith in Him: What kind of love is this?!  I am awed and humbled, again, that the God who I try to devote myself to, however imperfectly, is totally devoted to me.  Just as He is devoted to you.